NYC:  The message not to fling (cab) doors open without first checking for bicyclists will be hammered home in a video message that will play on all 13,000 Taxi TVs (assuming passengers don’t turn them off first). “Take out a friend,” reads the message on the video. “Take out a date. But don’t take out a cyclist.”

On Thursday, September 27, 2012, between 8:30 a.m. and 11 a.m., TPS Divisional traffic officers will be attending intersections across the city, speaking with pedestrians about safety risks while crossing the street and texting/talking on cell phones or listening to music with headphones.

Seven of 17 pedestrian fatalities this year are a result of vehicles turning at intersections.

Police are encouraging pedestrians not to use communication devices while crossing the street.

The media is invited to attend the kick−off at the intersection of Danforth Avenue/Coxwell Avenue at 8:30 a.m.

Available to speak with the media will be a 23−year−old woman who sustained serious injuries when she was struck by a car, crossing mid−block while listening to music on her iPod. 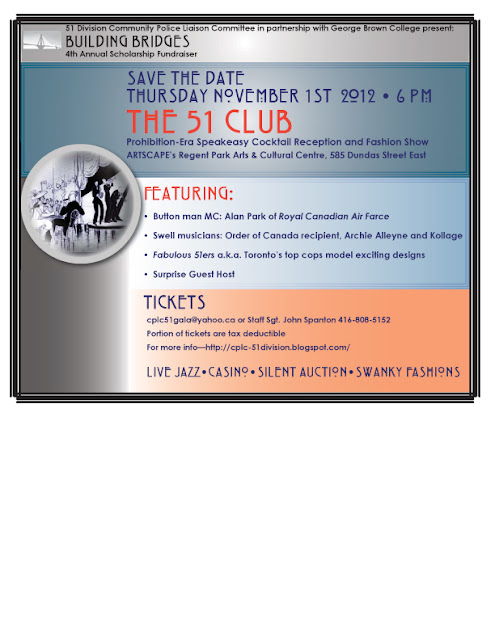 The Toronto Police Service would like to make the public aware of an arrest in a sexual
assault investigation.

He is scheduled to appear in College Park court on Friday, September 21, 2012.

On Thursday, July 26, 2012, Chief William Blair announced the launch of the Toronto Police Service Summer Safety Initiative (SSI). It involved a significant increase in police presence across the entire city and additional resources for TPS investigative units. The SSI concluded on Sunday, September 9, 2012.

At a news conference at police headquarters on Friday, September 14, 2012, Chief Blair announced the results of the SSI.

Some reporters and commentators drew comparisons between this summer and the summer of 2005. For the period of the SSI, crime was down significantly in all gun−crime categories, compared with the same period in 2005:

Crime was also down significantly in all seven Major Crime Indicators, compared with the same period in 2005:

The Toronto Police Service is continuing to request the public's assistance locating a man wanted in a sexual assault investigation.

It is alleged that:
- on Thursday, August 23, 2012, at 2 p.m., the man approached an 18-year-old woman in the Yonge Street/Wellesley Street West area
- the man befriended and engaged the woman in conversation
- the woman was taken to a nearby apartment building where the man sexually assaulted her

It is further alleged that:
- on Friday, August 24, 2012, at 3 a.m., the man approached a 40-year-old woman in the Dundas Street East/Parliament Street area
- the woman was taken by the man to the rear of a nearby commercial establishment
- the man sexually assaulted her

It is also alleged that:
- on Wednesday, August 29, 2012, at 2 a.m., the man approached a 26-year-old woman in the Yonge Street/Gloucester Street area
- the woman was taken to a nearby apartment building and sexually assaulted.

Thomas Reardon, 34, of Toronto, is wanted for:
1) three counts of sexual assault

The suspect is described as white, 5'9", 190 lbs., blond mohawk-style hair with blue eyes. He is known to ride a bicycle.

Police believe there may be more victims.

Anyone with information is asked to contact police at 416-808-7474, Crime Stoppers anonymously at 416-222-TIPS (8477), online at www.222tips.com, text TOR and your message to CRIMES (274637), or Leave A Tip on Facebook. Download the free Crime Stoppers Mobile App on iTunes, Google Play or Blackberry App World.

An attachment to this release is available on the TPS website.

City of Toronto Media Relations has issued the following:
==========================================
News Release:  September 12, 2012
Gardiner Expressway closed this weekend for fall maintenance
The City of Toronto's Transportation Services Division will be performing maintenance activities on the Gardiner Expressway this weekend. A full closure of the expressway is required to ensure the  work can be performed safely.
The expressway will be closed in both directions from Carlaw Avenue to the Humber River from 2 a.m. on Saturday, September 15 to 5 a.m. on Monday, September 17.
"The Gardiner Expressway is a key component of our transportation system in Toronto and this maintenance work is necessary to keep the roadway in a state of good repair," said Councillor Denzil Minnan-Wong (Ward 34 Don Valley East), Chair of the Public Works and Infrastructure Committee.
Specific activities that will be undertaken during this closure include:
Ø  catchbasin cleaning to ensure proper drainage at about 800 locations
Ø  pavement markings involving a total of about 1,100 square metres of pavement
Ø  maintenance of five static signs
Ø  maintenance of closed-circuit television involving six traffic cameras
Ø  inspection of 19 overhead signs
Ø  repair of RESCU (traffic management system) vehicle detectors at four locations
guide rail repair for a total length of about 700 metres
Ø  sweeping operations and litter removal
Ø  site investigation for two proposed variable messages signs
Ø  structural inspections at eight locations of the elevated portions of the expressway
Ø  structural rehabilitation work on the expressway from York Street to Jarvis Street
Ø  replacement of nine light poles
Motorists can use Lake Shore Boulevard, The Queensway, Richmond Street, Adelaide Street, King Street and Queen Street as alternative routes during the closure. Motorists should be aware that two lanes of Richmond Street will be used for film production west of University Avenue from 7 a.m. to approximately 11 a.m. on Sunday, September 16.
Whenever possible, the public is encouraged to consider using public transit as a convenient alternative.
A more complete list of road work and events is available at http://www.toronto.ca/torontostreets/.
In addition, the City recently introduced T.O. INview, a map of information about planned capital construction work taking place across the city. The site can be accessed at http://www.toronto.ca/inview.
Toronto is Canada's largest city and sixth largest government, and home to a diverse population of about 2.7 million people. Toronto's government is dedicated to delivering customer service excellence, creating a transparent and accountable government, reducing the size and cost of government and building a transportation city. For information on non-emergency City services and programs, Toronto residents, businesses and visitors can dial 311, 24 hours a day, 7 days a week.
Media contact: Steve Johnston, Senior Communications Coordinator, 416-392-4391, sjohnsto@toronto.ca
Posted by CPLC - 51 Division at 15:06 No comments:

The Toronto Police Service is alerting the public to a sexual assault investigation and is
requesting the public’s assistance identifying a man.

It is alleged that:
- on Saturday, September 8, 2012, at approximately 8 a.m., a 35-year-old woman was walking eastbound on Gould Street near Bond Street when she was approached from behind by a man
- the man grabbed the woman and sexually assaulted her
- she screamed and the man fled northbound through a courtyard.

The man is described as black, approximately 20, 6', and was clean shaven. He was wearing a black hooded sweatshirt and grey sweat pants.

We would like to extend an invitation to you to join us for an evening of fun for the 4th annual Building Bridges Gala.  The Toronto Police Service's 51 Division Community Police Liaison Committee (CPLC) has been serving the Division since 1996.

This fundraising initiative is an opportunity for us to work towards our goal of providing bridging scholarships for at-risk urban youth to attend George Brown College with guidance from such community partners as Pathways to Education and the Regent Park Community Health Centre, as well as support for various youth programs in 51 Division.

We are honoured to have George Brown College as our co-presenter of the evening's fashion and art show again this year.

Our goal is that our annual Building Bridges Gala surpasses the tremendous success of our earlier fundraisers, exceeding all expectations. We hope that we can count on your support to help us achieve that goal.

Tax receipts for donations and tickets will be available upon request 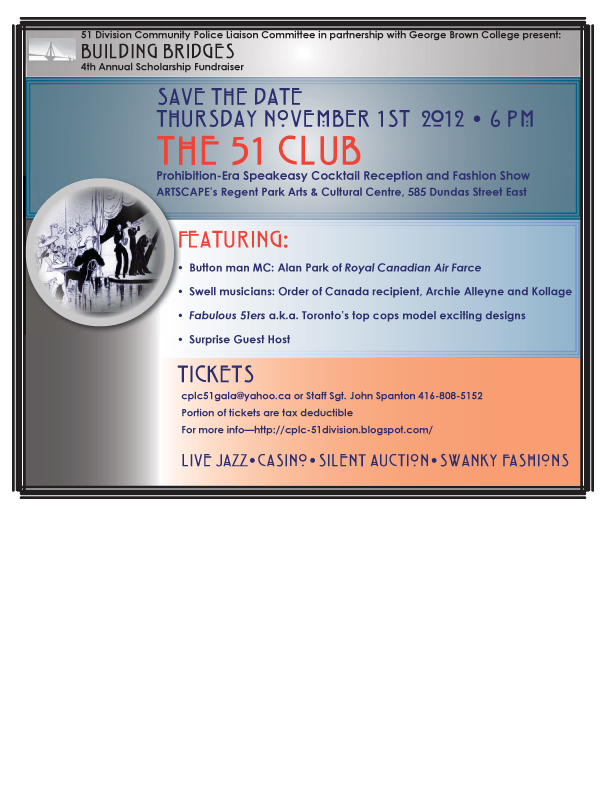 Calling all Toronto residents, 10–24. Have you ever wanted to create your very own short Public Service Announcement (PSA) video? Maybe drawing or graphic arts is more your thing and you’d rather make a PSA poster? Never had a topic to work with? Well, how about this:

Do you:
− know when to call 9−1−1?
− know the difference between an emergency and a non−emergency situation?
− know the TPS non−emergency telephone number?
− have a message about misuse or abuse of 9−1−1?
− want to educate the public on how to avoid pocket dials to 9−1−1?

Would you like to share your knowledge with the citizens of Toronto? If you answered, "yes," then our contest may be just what you're looking for.

The contest opens Sunday, September 9, 2012, and closes Friday, November 9, 2012. The winning selections could become the official Public Service Announcement of the Toronto Police Service and your entry could be shown on the internet as of Monday, December 10, 2012.

For further information, contact Tracy Finn, at tracy.finn@torontopolice.on.ca or by calling 416−808−8899.

The Toronto Police Service is alerting the public to a sexual assault investigation and requesting the public's assistance identifying a man.

It is alleged that:
- on Tuesday, September 4, 2012, at approximately 6:30 a.m., a 20-year-woman was walking in the Church Street/Gerrard Street East area
- a man followed the woman to Mutual Street, south of Gould Street, where he sexually assaulted her
- the man fled when the victim screamed
- as the woman continued southbound on Mutual Street, the man sexually assaulted her a second time, just north of Queen Street East
- the woman was able to fight off the man, who fled the scene

The man is described as black, with a dark complexion, in his 20s, between 5'8" and 6', with a medium build, with shaved or short hair. He was wearing a black zip-up hoodie with white block letters across the chest, grey track pants, and distinctive prescription glasses with frameless lenses.

Anyone with information is asked to contact police at 416-808-7474, Crime Stoppers anonymously at 416-222-TIPS (8477), online at www.222tips.com, text TOR and your message to CRIMES (274637), or Leave A Tip on Facebook. Download the free Crime Stoppers Mobile App on iTunes, Google Play or Blackberry App World.