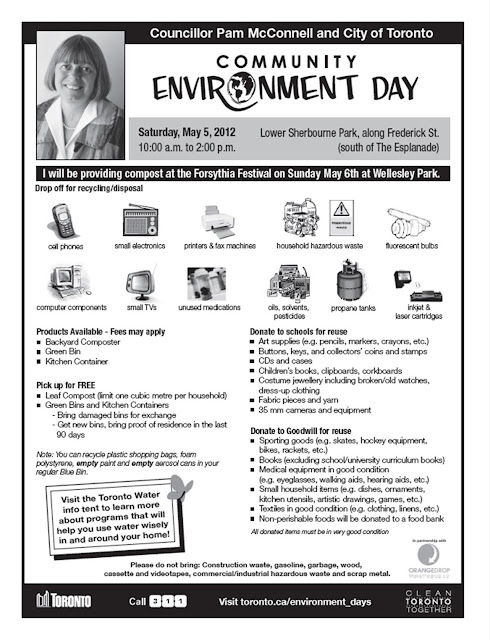 Residents of Moss Park and the Garden District met with local politicians on April 23 to provide feedback and suggestions for the future of their community.

The meeting, held by city councilor Kristyn Wong-Tam and Toronto Centre MPP Glen Murray, is one of five follow-ups to initial meetings held in May and June of last year to draft a community action plan to engage local residents and stakeholders to develop long-term goals for wards 27 and 28.

“This is a period when a lot of change is happening,” said one community member, “and it’s a critical time to look ahead, and to take part in the planning for the neighbourhood. It’s about community building.”

Poverty and related health and safety issues topped the list of concerns for area residents. David Raycroft, director of housing and homelessness services at Dixon Hall, was present, and expressed his desire to see more support for street people. “We have a shelter located on George St., so my interest is in what happens with the folks in the shelter,” he said.

Councilor Wong-Tam said that action is being taken, but that some neighbourhoods—particularly around George St.—are going to need a lot of work. To start, she has begun pushing rooming house owners to bring their facilities up to code, has asked the local police station for more support in troubled areas, and has met one on one with George St. property owners to see how they can help.

14 new affordable housing units are also being built. It’s a good start, says Wong-Tam, but she believes her ward needs more resources if it wants to tackle poverty head on. “10% of all Section 37 funds in the ward is going back directly into [Toronto Community Housing Corporation] housing,” she says, “but that’s only going to scratch the surface.

The councilor’s primary concern is that condominium developments, if left unchecked, are going to squeeze out the less fortunate. “If we allow the free market forces to run away with the neighbourhood, what we’re going to have is a very polarized neighbourhood of extreme wealth and extreme poverty,” she says, “and that’s not going to work for us. The neighbourhood needs to be cohesively woven together.”

Wong-Tam’s concerns were echoed by those present. Many were worried about building development, and didn’t want to see neighbourhoods losing their sunlight and sightlines to high-rise buildings, which they claim also compromises the historical character of the surrounding area.

Murray acknowledged this issue, and mentioned that the topic had come up in previous community meetings. “Balancing new development with heritage and identity, and preserving our historical architecture is very important,” he says.

Some action has been taken. City council is currently being asked to initiate a Heritage Conservation District Study, which could help to protect designated buildings.

Don't forget to come to the Town Hall meeting!

Give a book. Be the Difference

Our goal is to collect 20,000 books to be distributed to the libraries established by the Second Chance Scholarship Foundation and The Children's Breakfast Club.  We hope to inspire children and youth who have not had the opportunity to develop a passion for reading.
Please drop off your book donation at ANY police division between May 13 and June 2, 2012 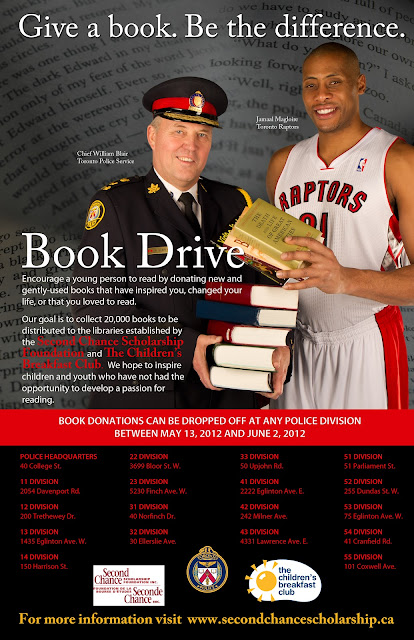 Great information and tips to use whether you live in Regent Park or anywhere else! 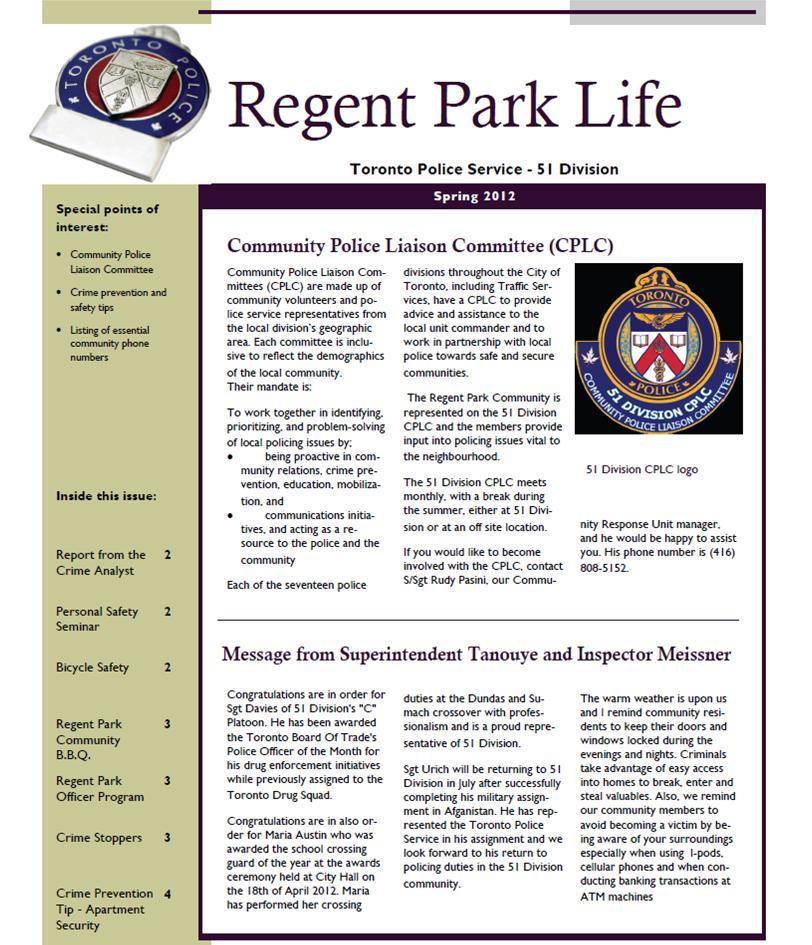 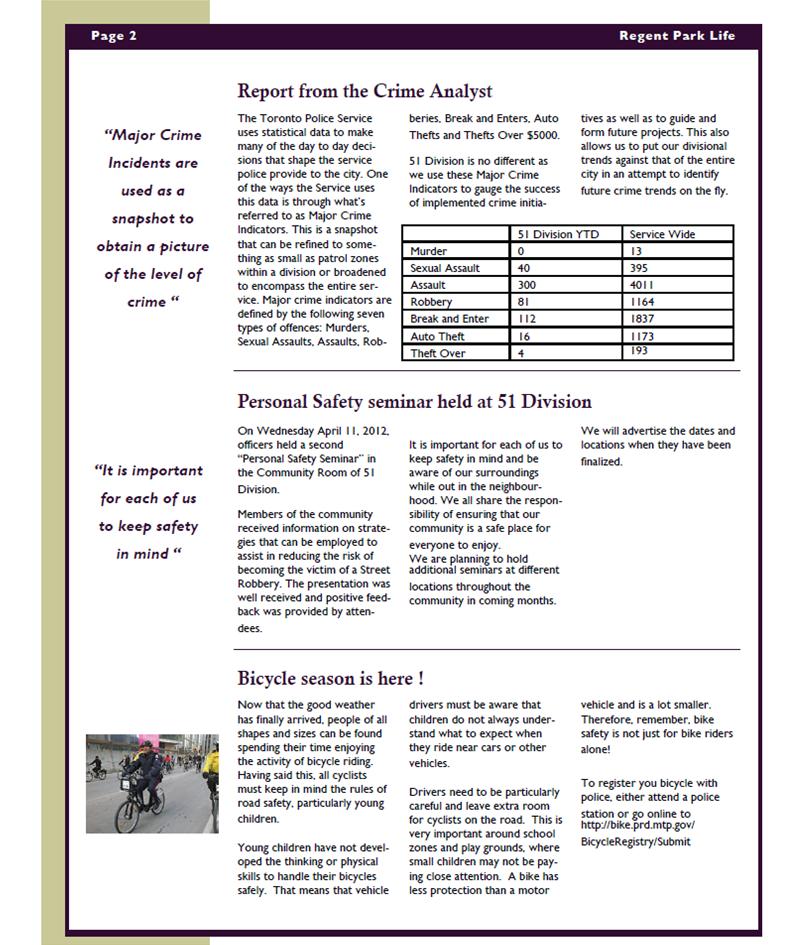 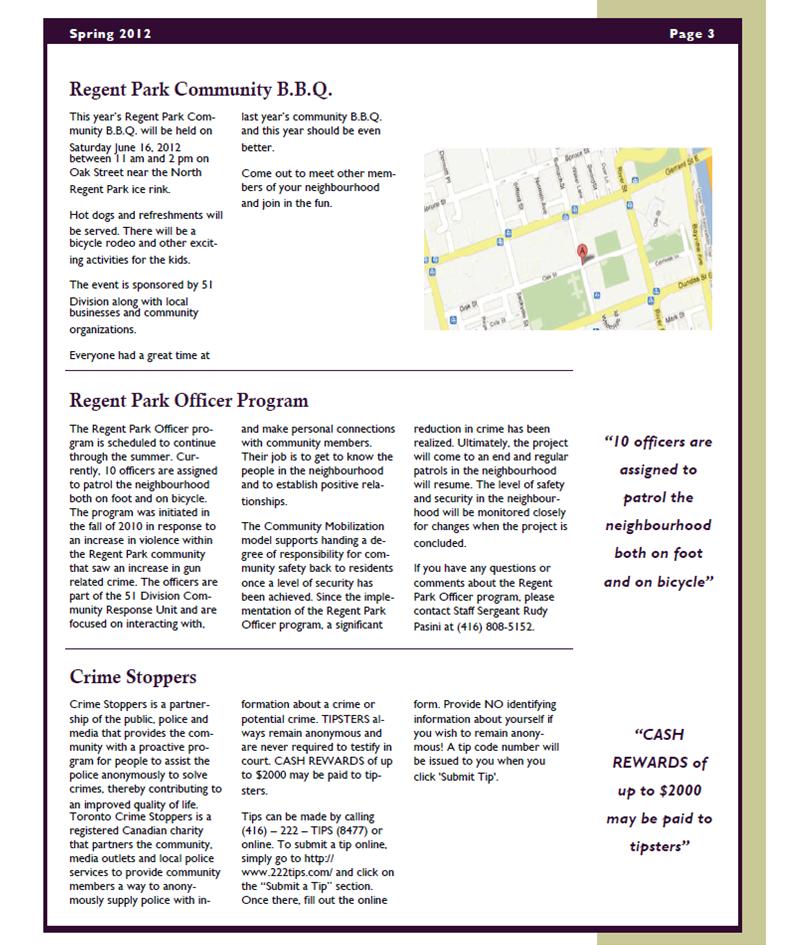 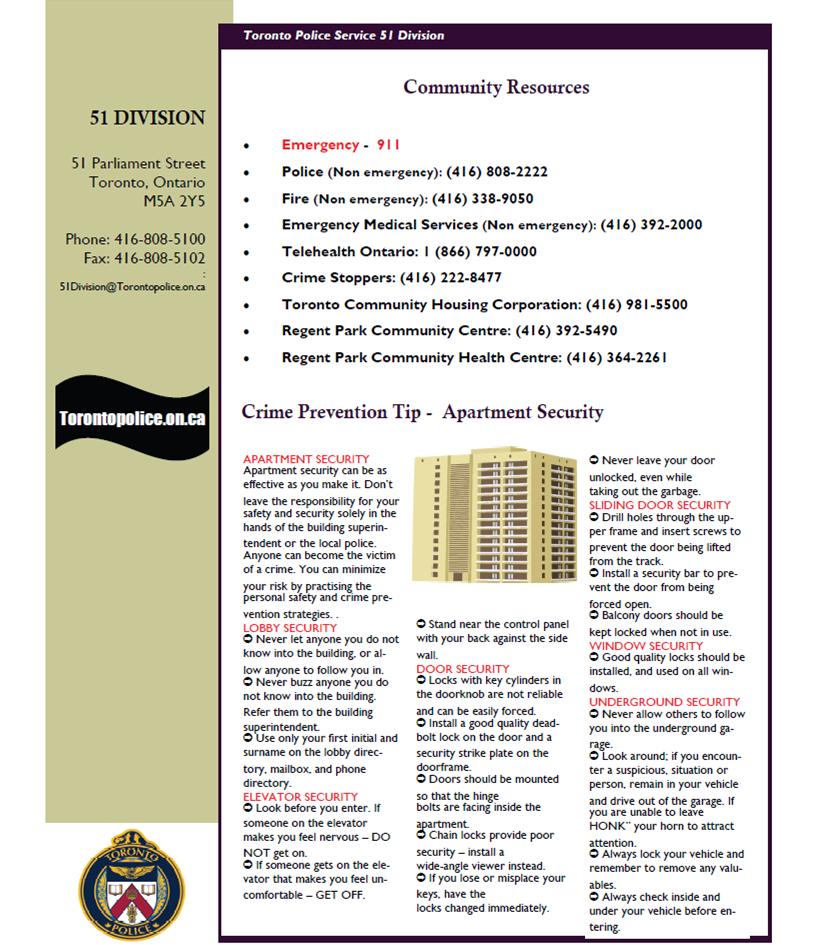 311 Toronto recently invited application developers to work with the City using the Open311 standard. Toronto residents, businesses and visitors can now report potholes and graffiti to 311 using the supported apps listed below, with the ability to include a photo. Other apps are in discussion/development.
Get an app now! Visit one of these company sites for details on downloading a supported mobile app:

Please follow these few simple tips to help us help you:
1. Provide accurate address information.
When the map displayed on your mobile device is "zoomed out", sometimes we don't get a specific address. The crews need to know where to go to fix the problem.

For example:
33 Yonge Street: Good
1-50 Yonge Street: Not good – too general
Solution:
"Zoom In" on the location to provide us with the most accurate address possible.
2. Provide a short description of the problem in the report.
Yes, we'll get your picture if you provide it, but it may not be clear. A few words will really help out.
3. Provide a short description of the location in the text of the report.
This is necessary because the applications don't always give us the correct address automatically. The accuracy is based on the limitations of the phone, the quality of the cell signal, etc. Also, it's helpful to include information like:

About the Open311 standard

Open311 is a set of technologies and standards for providing open, two-way communication around city service- and issue-tracking. More specifically, Open311 enables a web-based application programming interface (API) to connect with existing 311 systems. This permits applications to be built that interface directly with the city.
For more information on Open311 and the collaborative effort to create an open standard for 311 services, visit the Open311 website (source). 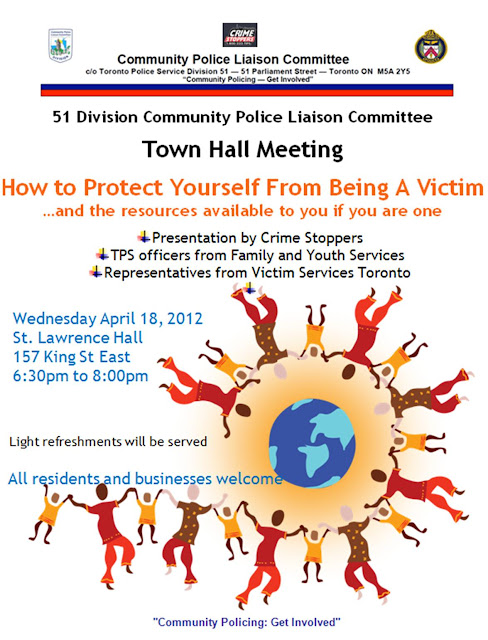 
It was one of the messages coming to the residents of 51 Division during an April 18 townhall session at St. Lawrence Hall designed to prevent people from becoming victims of crime.
“There have been street robberies across the division and we want to make people aware of their surroundings so they are less likely to be victimized,” 51 Division unit commander Supt. John Tanouye said, of the thefts that often target young people with electronic devices.
Presentations were also made by the Family Violence Unit, Crime Stoppers and the 51 Division crime analyst. All officers were involved in a panel afterwards open to questions from the 70 residents on hand. 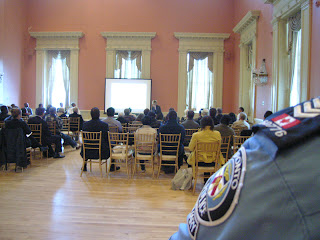 Tanouye said elder abuse and domestic violence was a topic police wanted to address in order to encourage people to report the crimes.
“Some victims of abuse can’t see a way out of their situation,” he said. “We want them to know that the police can assist them in ending their abuse and connecting them with social services and other resources.”
Tanouye said the townhall was a “unified approach” to addressing victimization that allowed the community direct contact with the officers who do the job every day.
Posted by CPLC - 51 Division at 02:36 No comments:

Police would like to make the public aware of ATM skimming devices affixed to ATMs within hospitals.

Tamper devices are equipped with a secondary card reader and a pinhole camera. Customer PIN and card data are recorded and stored on the devices for the production of counterfeit credit and debits.

This tamper devices are placed on top of legitimate components of the ATM.

Members of the public who use any ATM, at any location, are reminded to always cover your PIN.

To expand the opportunities for community input, the Toronto Police Service has included online polling on its website.

Questions will be posted on various policing issues and the results published at the end of the period. Results from previous polls are also available.

A new poll began on Wednesday, April 11, 2012; the survey asks your opinions on gridlock in Toronto – is it getting better or worse and what is the best way to ensure efficient traffic flow during rush hours.

The TPS is encouraging the people of Toronto to visit the “Have Your Say” section on the TPS website, and provide the Service with their opinions. 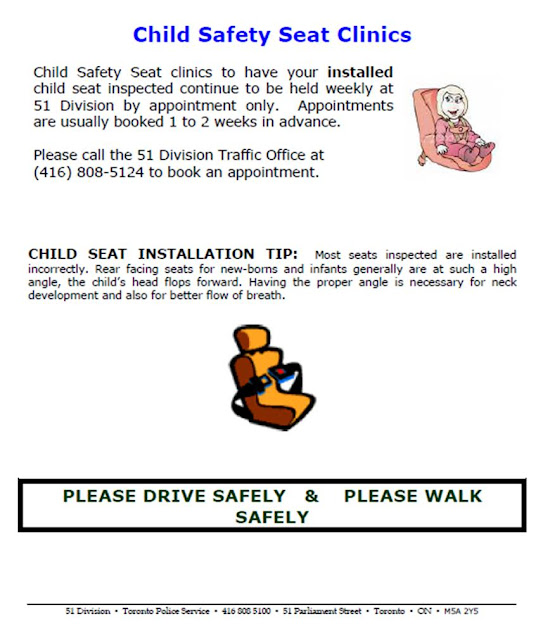 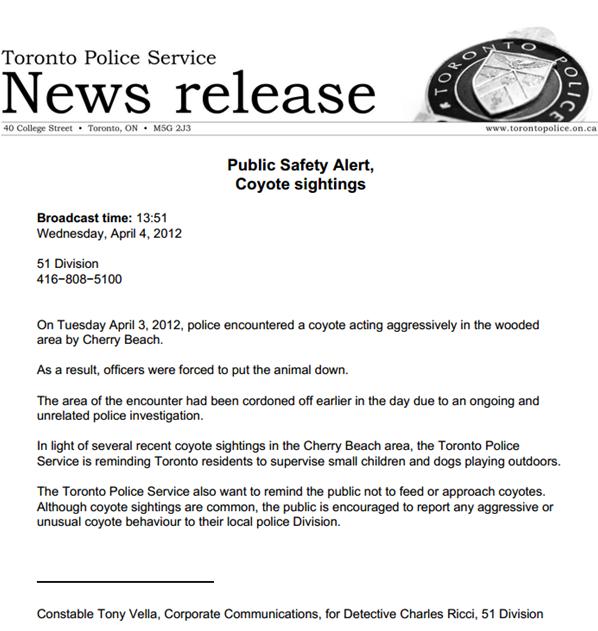